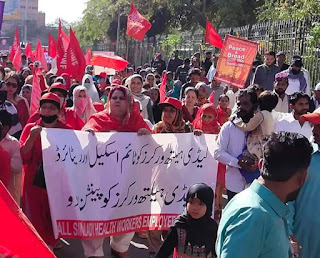 "Halima Leghari, President, All Sindh Health Workers and Employees Union with other health workers at the October 2020 protest in Islamabad"

Health workers around the world today are glorified for saving other people’s lives while risking their own during the Covid-19 pandemic. Yet the basic human rights of these vulnerable heroes are being undermined, as Amnesty International warns of another crisis in which thousands of health workers are dying to save others. The shortage of lifesaving protective equipment, coupled with unfair pay and lack of benefits in numerous countries, has forced health workers to mobilize and protest against the conditions in which they have to work during the pandemic.

In Pakistan, too, the rights and lives of health workers have been deeply compromised during the pandemic response. Since different cadres of health service providers already have a history of mobilizing, could their response to current risks provide the catalyst for them to join forces to transform the conditions of work in the health sector? Our research suggests this may be happening amidst the pandemic as they collectively act to bring forward new demands and solidify older ones.

At the Collective for Social Science Research, we have been following changes in civic space since Covid-19 first emerged in the country in March. This is part of the ‘Action for Empowerment and Accountability’ (A4EA) research programme - a multi-country study in collaboration with the Institute of Development Studies (IDS) - focusing on how social and political action impacts empowerment and accountability in fragile, conflict and violence-affected settings. We conduct detailed media tracking, monthly observatory panels, and interviews with civil society actors to discuss changes as they happen.

During March 2020, as healthcare workers in Pakistan began gearing themselves to fight the virus, the Punjab Assembly passed the controversial and contested Medical Teaching Institutions (MTI) Reforms Bill, ironically on the same day as the World Health Organization (WHO) recognized the spread of Covid-19 as a pandemic. The Act was formulated as a result of a deal with the International Monetary Fund (IMF) in May 2019, which stipulated cuts to social spending ultimately privatizing public health facilities. Health workers have been fighting against the draft Act for a year now; they created the Grand Health Alliance (GHA) to pressure the government to repeal the Act in Punjab. The protestors argued that the Act was harmful for both health workers and patients. It gives health workers the status of contractual employees as opposed to those within a civil service structure, thus affecting their job security. It is also ‘anti-patient’ because the privatization of healthcare will make it less accessible to the poor.

Even though GHA initiated its protests in Punjab, they now have chapters in all provinces. Pakistani doctors aren’t well-equipped to deal with Covid-19 patients - many doctors have lost their lives whilst saving Covid-19 patients due to high exposure to the virus. Doctors have protested for the provision of PPEs and against non-payment of salaries by boycotting OPDs and staging hunger strikes in urban centres. Dr. Alia Haider, a practitioner and activist based in Lahore, said when she went to hospitals to distribute PPEs, doctors demanded that the PPEs should be given directly to them instead of the superintendents. “If you are sending a soldier to the borderline, you equip them. You give them guns, bulletproof jackets etc. However, when doctors are going in the frontline to save patients, they aren't given any PPEs. So, this means that the government believes that a doctor's life is not as important as a soldier's.”

Our tracking of civic spaces during the time of Covid-19 has revealed that health workers have been arrested, baton-charged and shamed during protests for not being present in the frontline during the pandemic. For example, in Quetta, police baton-charged and arrested several young doctors protesting for provision of PPEs and in Lahore, they thrashed  members of GHA protesting at a hunger strike. Dr. Haider claims health workers were demonized for demanding their basic rights, “There was always this notion that doctors and health workers are mostly working for their own means as they are closing down OPDs. But the real situation was totally opposite and we all got to see it. Balochistan's doctors protested, and they were arrested and put in jail for two days.”

Nurses hired during the emergency situation say they are being mistreated through inadequate provision of  PPEs and irregular salaries. During May, on International Nurses’ Day, they staged a sit-in outside the Karachi Press Club to draw attention to the reality that 40 nurses in Sindh were already infected with the virus. Months after the outbreak of Covid-19, nurses protested outside the Chief Minister’s house due to unmet demands but they were baton-charged and ten arrested. Still, they announced that they would not back down until their demands were met, and went ahead to join the LHWs in their October protests.

Moreover, amidst a massive public health crisis, the National Assembly passed a surprise bill mandating all medical students, many of whom began to volunteer after the spread of the virus, to give the National License Examination (NLE). Previously, only foreign graduates were obligated to give the NLE if they wanted to practice medicine in Pakistan. In another move, the Pakistan Medical and Dental Council (PMDC) was replaced with Pakistan Medical Council (PMC) to enforce the NLE. Prime Minister Imran Khan believes that mandating NLE will raise the standards of local medical and dental colleges to an international level, but medical experts deem it to be discriminatory and illogical. Students will only focus on clearing the NLE which will compromise their overall learning and adversely impact the quality of education.

Compounding the problem, PMC cannot regulate the fee charged by medical colleges which means that financial burden on students’ families will increase and several individuals won’t be able to afford the extortionate fee. The Young Doctors’ Association (YDA) staged several protests after this unnecessary bill was passed, and hashtags such as #werejectNLE and #werejectPMC began trending on social media. The Council, encompassing bureaucrats rather than medical experts, recently announced that it will conduct the Medical and Dental College Admission Test (MDCAT) without an academic board or medical authority mandated to design the syllabus and conduct this examination. Infuriated students filed a petition against MDCAT. After vigorous online activism, Sindh High Court delayed the examination for 15 days so the Council could develop a board and authority to meet students’ rightful demands.

Lady Health Workers are essential to Pakistan’s response under Covid-19, as the largest cadre of community-based healthcare providers in the country. LHWs have been mobilizing since 2010 against insecure working conditions, characterized by irregular and inadequate salaries, and part-time status as government employees. The pandemic has only worsened their situation.

Halima Leghari, President, All Sindh Health Workers and Employees Union says LHWs haven’t been given any facilities or kits during Covid-19 and they are working on the frontline without any protection or security. They didn’t receive sanitizers or masks as protection from the highly contagious virus and purchased protective equipment themselves. She claims that LHWs in Sindh were receiving a health risk allowance since Covid-19 began spreading in Pakistan but that allowance halted in October, due to which health workers in Sindh began boycotting OPDs. Bushra Arain, President of Lady Health Workers’ Association also complained about the lackof requisite equipment and reported that it was difficult for LHWs continue their work as contraceptive supplies began running out and they were unable to fulfill their communities’ needs.

On October 14th, frustrated LHWs and pensioners staged a sit-in in front of the Parliament House demanding changes in the service structure, increase in pensions, life insurance, salary increases and protection in the anti-polio campaign. LHWs protested in dire conditions at D-Chowk in Islamabad for seven days and only ended their sit-in when government promised to meet their demands in the next few months.

With the healthcare system in Pakistan crippled already, it appears that health workers, essential but vulnerable, have no choice but to protest during these conditions of an unprecedented pandemic. Neglected demands coupled with unjust new regulations are forcing critical stakeholders from the health sector to stage collective protests to amplify their voices. Clearly, a pandemic is not the time to privatize the health sector, introduce NLEs or stop health risk allowances. Their demands should be a priority for government in its pandemic response, before the different cadres of health service providers unite in their refusal to work without adequate protections and conditions of employment.